XXY Is Not Klinefelter Syndrome (KS) 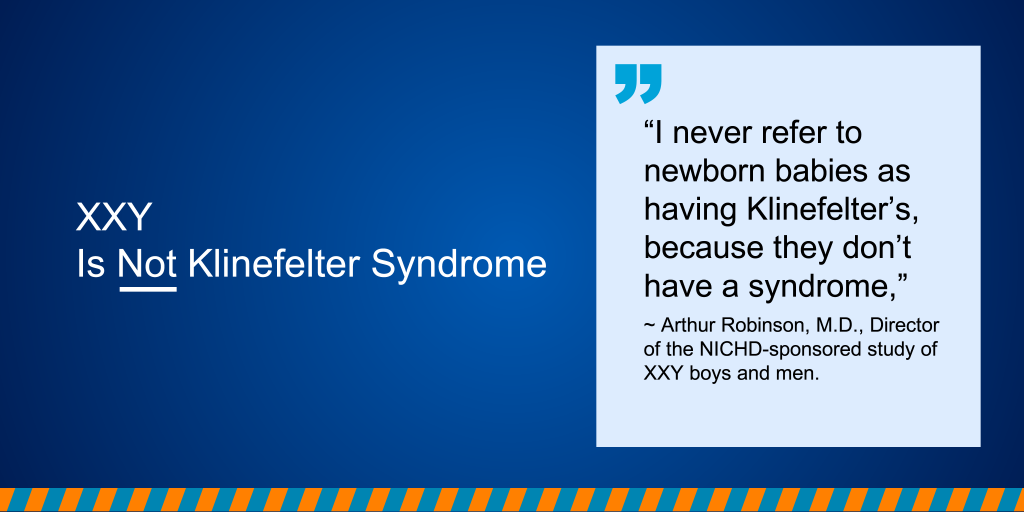 Medical researchers incorrectly call XXY chromosomes “Klinefelter syndrome,” yet many doctors acknowledge that no such symptoms may be present in XXY men. Some published studies have even stated this, yet many researchers and doctors continue standing by the outdated assertion.

This distinction is important because doctors use “Klinefelter syndrome” interchangeably with “XXY,” misleading and misinforming right from the outset of discussing the differences with patients and parents.

Some doctors call Klinefelter syndrome a misnomer, openly stating there never was a syndrome.

Klinefelter symptoms cannot manifest, if they do at all, until puberty (and the symptoms can also be found in XY men). Therefore, any up-to-date doctor should know it is impossible for an XXY fetus, baby, or child to have Klinefelter syndrome.

Why XXY Is Not A Syndrome

A syndrome is defined as a group of symptoms that together are characteristic of a disorder or disease. Yet, in the case of XXY chromosomes, even when the symptoms are not present—in double-standard fashion which defies the medical definition of syndrome—many doctors still call XXY chromosomes “Klinefelter syndrome.”

There are no universal XXY symptoms, and not necessarily any groups of symptoms. In fact, many XXY men have no symptoms. They are simply regular men.

People frequently and incorrectly associate various chromosomal anomalies, as though they were related. The truth is, there is no more of a relation between different chromosomal anomalies than there is between XX and XY. Each iteration of human has its own characteristics and value it brings to the world.

When supposed symptoms are present, the exact same “symptoms” can be found in equal measure in XY men. Furthermore, any present XXY-specific issues can easily be addressed in individuals.

Researchers and doctors acknowledge that XXY men are fully capable of doing anything XY men can do.

There is no valid reason for medical researchers or doctors to equate XXY to Klinefelter syndrome.

Out With Klinefelter Syndrome, In With XXY

Klinefelter syndrome should be permanently purged from XXY medical terminology.

While we’re at it, let’s also lose the idea that XXY is a disease. It is not. Calling XXY a disease is like calling XY a disease when compared to XX, and while some women may like such an idea, most men would be quite offended. Worse, when you tag a person’s chromosomes with a disease label, you are literally saying their very DNA and every cell in their body is diseased. That is inhumane, and it is incorrect.

If you hear a doctor say the presence of XXY chromosomes means you or your child has Klinefelter syndrome, correct them. They have it wrong.

Write to Google to tell them they have it wrong.

Poor old Wikipedia gets it wrong on nearly every “fact” on their page, from the discovery date to equating various anomalies to calling XXY—guess what—Klinefelter syndrome. They consistently fail to mention the unnatural biases and fundamental research flaws. Don’t bother writing Wikipedia to correct anything because they will ferociously defend the grotesquely incorrect information on their XXY page. Should you, as an experienced XXY man, decide to edit the page, within thirty minutes, a Wikipedia monitor will delete your corrections, restore the incorrect information, and send you a nasty email banning you from making any edits for a period of days. Unless, ostensibly, you are a doctor.

If Wikipedia can be considered—in some minuscule measure—a reliable source for some people, and with how ardently they protect their incorrect data, just imagine how the medical profession—which actually does have a high degree of credibility, just not with XXY—is with it. They are defiant. They are bullish. They are imposing. They are aggressive. They know beyond a shadow of a doubt that they got it wrong, yet they refuse to change the standards.

Imagine being an XXY man or boy being told (incorrectly) you will never be normal. Or imagine being one of the millions of expecting parents hearing from a misinformed doctor that your fetus has Klinefelter syndrome and that because of this you should terminate. Imagine, after terminating, learning the doctor had no idea about the inaccuracy of what they were saying.

This is part of why XXY standards change is so important. It is why Klinefelter syndrome should be eradicated from XXY terminology.

Get New XXY Articles in Your Inbox

Join the mailing list to receive the latest informative XXY articles and inspiration. (No spam or sharing your info.)

Thank You – You have successfully subscribed.